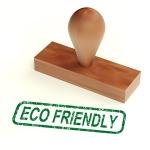 Using the term "eco-friendly" on custom beverage labels for coffee may make it taste better to consumers. Researchers in Sweden discovered that consumers preferred the taste of coffee labeled "eco-friendly," and were willing to pay more for it. Volunteers were given two cups of coffee. One was described as being eco-friendly, while the other was not. When volunteers were aware of which cup was eco-friendly prior to tasting it, nearly three-quarters reported they liked the green coffee more, and said they would pay 25 percent more for it. Including this kind of information on a product label can affect purchasing behaviors.

Custom Product Labels Help Consumers Make Benevolent Choices In the second part of the experiment, custom product labels did not indicate which variety was more earth-friendly. In this case, the label did not have an effect on ratings, according to The Los Angeles Times. These findings suggest that consumers' willingness to pay had to do with altruism.

A third experiment determined that tasters weren't making these choices based on social acceptability. Half of the participants stated their taste and payment preferences directly to researchers, while the other half wrote theirs down. The results were basically equivalent, indicating that social desirability did not seem to be a factor in the volunteers' decisions, the report stated.