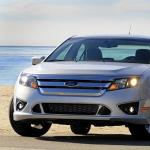 Since the Energy Policy and Conservation Act was passed by Congress in 1975, car window stickers designating the vehicle is within the required fuel economy standards have become the norm. The recent prevalence of hybrids has brought emissions and fuel economy testing back into the open. Ford has come under scrutiny in California about its classification of hybrids, with the claimant citing misleading advertisements.

Custom Car Stickers On Hybrids Fail Fuel Economy Tests  According to Car and Driver, a California law firm cited Consumer Report magazine's fuel economy testing of the Ford Fusion and C-Max Hybrids, which found the vehicles were below standard ratings, despite their custom car stickers saying otherwise. The Fusion hybrid was 17 percent below the 47-mpg rating, coming in at only 39 mpg, while the C-Max hybrid was found to be below the rating by 21 percent.

The Houston Chronicle reports that Ford has been in communication with the U.S. Environmental Protection Agency since the December filing of the lawsuit about how the agency tests fuel economy performance. Due to the wide range of hybrids on the market, the company said fuel economy testing should differ from traditional methods.