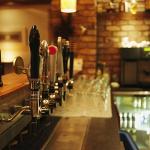 Approval on Labels for Beer Hindered by Shutdown

Since the United States government declared a shutdown on Tuesday, the federal approval process for labels for beer has halted completely. Brewers across the country waiting to have their custom beer labels OK'd by the Alcohol and Tobacco Tax and Trade Bureau may experience an operational backup.

In an email to The St. Louis Post-Dispatch, a spokeswoman for A-B InBev, the world's largest brewer, stated the company often has several label applications waiting to be processed by the TTB, which was forced to furlough most of its employees.

"A government shutdown could impact our ability to efficiently move those applications forward or submit new ones in the short term," the spokeswoman said.

Shutdown Delays Beer Labels Printing
As lawmakers work to develop a solution to the government shutdown, breweries large and small may have to delay beer labels printing indefinitely. Citing findings from Beerpulse.com, The Post-Dispatch said the TTB has 111,090 label applications for alcohol products, including wine, beer and spirits, this year. The shutdown is expected to pause the approval process for about 400 labels each day.