This entry was posted on December 16, 2015 by Lightning Labels . 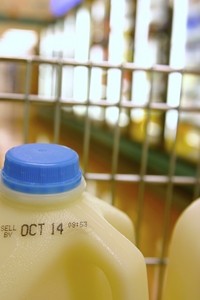 Clarifying Expiration Labels May Reduce Food Waste Given the amount of food-related illness outbreaks this year, it's no surprise many consumers are especially cautious about checking the expiration dates listed on food labels.

Most consumers are becoming more attentive to the foods they eat, not just because they fear food-borne sickness, but also because they want to lead a healthy life, which means purchasing "real," whole foods. However, usually these fresh vegetables and produce have shorter shelf-lives. If a consumer suspects a product has exceed its expiration date, naturally, he throws it away.

Frivolous Food Wasting Unfortunately, this doesn't help the existing issue of food waste in our country. According to the U.S. Department of Agriculture, approximately 30 to 40 percent of all food, a total worth of about $161 billion, is wasted every year. Of course, not all of this percentage can be definitively blamed on domestic households, but research has indicated we may be contributing to it.

The Food Marketing Institute recently conducted a survey that revealed nearly 50 percent of consumers who see a product has reached or surpassed the sell-by or best-by date will most likely dispose of it, The Wall Street Journal's Anne Chaker noted.

While it is wise to be careful what we consume, which includes trying to avoid food contamination, our misinterpretation of these labels may result in unnecessary levels of food waste.

When it comes to understanding these labels, Americans are generally missing the point, Natural Resources Defense Council Scientist Dana Gunders suggested to Chaker.

"The manufacturer is not trying to tell you to throw a product out at that date," she clarified.

Real Meaning of Expiration Labels One of the most important things for consumers to understand, Gunders indicated, is that these expiration dates are not so much mandatory regulations for consumers as they are mere suggestions. Furthermore, they aren't there to indicate the safety of a food product past a certain date, but rather the quality of it.

Gunders highlighted the three common expiration terms used on food product labels: sell-by, use-by and best-before. The sell-by date, the source explained, is used more as a form of communication between manufacturers and stores so retailers have a reference point that allows them to manage inventory and sell food at peak quality.

It is the best-by label that is aimed directly at the customer, but only as a manufacturer recommendation, Gunders explained. Many consumers fail to realize that this label is not indicating the food goes bad or that it automatically becomes unsafe to eat after that date. And this is where so much, perhaps too much, is left for individual interpretation.

This is one issue The Food Recovery Act aims to alleviate. Congresswoman Chellie Pingree introduced the bill to Congress this week in an effort to reduce the amount of wasted food in America. The bill proposes that it should be required for manufacturers to include "Manufacturer's suggestion only" alongside the expiration-related date on food product labels.

"Currently there are no federal laws regarding expiration dates," stated Pingree. "Manufacturers can go overboard with the dates they put on food and it can lead to consumers and retailers throwing out perfectly good food."

Pingree explained that, since the amount of food wasted in America equates to approximately $125 per family of four, this bill could help not only save money, but feed families as well.

"The Food Recovery Act takes a comprehensive approach to reducing the amount of food that ends up in landfills and at the same time reducing the number of Americans who have a hard time putting food on the table," she also said.

Fear of Food Illness One of the most surprising aspects of expiration labels Gunders mentioned to Chaker is that, contrary to popular belief, it is not eating food past its suggested date that causes illnesses like food poisoning, salmonella or e coli. Most people get these sicknesses from bacterial contamination that takes effect on the farm, or in the beginning stages of production.

Consumers are more likely to get sick from the improper handling of food or the growth of bacteria in food processing than they are because they eat food five days after its expiration date.

According to Gunders, the best way for consumers to avoid food-related illnesses and reduce waste is to simply follow their own senses. If it has an unusual odor or tastes strange, throw it away. But don't solely rely on the expiration date of the product label to guide you.