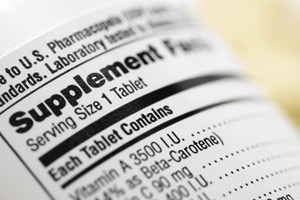 Experiment Finds Overconsumption of Food Linked to Labeling When setting out to shed a few pounds, most people believe that simply eating healthier will help them achieve that goal. Unfortunately, new findings show that this assumption could have an adverse effect.

A study conducted at the University of Texas, Austin recently suggested that health-related food labels could actually be contributing to obesity rates.

The research, which was published in the Journal of the Association for Consumer Research, was broken up into three experiments. The first segment analyzed the association people make between "healthy" and "filling" foods. The second inquired about the participants' level of hunger after they ate a cookie that was labeled as either "unhealthy" or "healthy." The third installation compared how much food people consumed while watching a movie to what they requested before the film started.

In all three tests, it was found that people believe foods that are healthy are less filling. It also indicated that healthy food labels make consumers falsely believe they can eat more of  the product because there aren't as many calories. As a result, the researchers suggested, people tend to consume more than the recommended serving size.

Therefore, the conclusion was drawn that the increase in using healthy food labels on packaged products could actually be contributing to the epidemic of obesity, rather than help to reduce it.

Problem with Confusing Nutrition Facts The concept of overindulgence attributed to product labeling is something researchers have been drawn to before.

Not too long ago, this issue was further examined in a study conducted by German researchers and was also published in the Journal of the Association for Consumer Research.

The experiment found that the smaller the serving size listed on nutrition labels, the more of the food consumers tend to buy. In both scenarios, a person assuming a food is healthy causes them to purchase, order or eat more than they otherwise would.

Similar to how manufacturers can manipulate nutritional values by reducing serving sizes, there are also other percentages that can be inaccurate.

In an article for The Conversation, Harvard University professors Richard Wrangham and Rachel Carmody pointed out that labeling, specifically calorie counts, can be misleading because the number of calories included can vary depending on how the food was processed. For example, the source said, eating raw foods helps people lose weight, whereas a person can gain weight if they eat the same item, only cooked.

"Our food labeling therefore faces a choice between two systems, neither of which is satisfactory," the authors explained. "The first gives a precise number of calories but takes no account of the known effects of food-processing, and therefore mis-measures what our bodies are actually harvesting from the food. The second would take account of food-processing, but without any precise numbers."

The Food and Drug Administration is currently reevaluating the packaging and labeling requirements for the food industry. However, until updated regulations are set, consumers are encouraged to be especially aware of nutrition facts.