This entry was posted on February, 15 2015 by Lightning Labels . 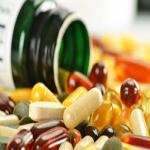 Retailers in Hot Water Over Supplement Labels Accuracy is an important element of all product labels, but it is especially critical with regard to the packaging of items intended for human consumption, such as food, beverages and nutraceuticals.

It's the last category that has presented some trouble for four big-name retailers: Target, GNC, Walgreens and Walmart. As The New York Times reported, the New York State Attorney General's Office recently sent cease-and-desist letters to the quartet, demanding that they stop selling a number of their dietary supplements. Why? A series of tests conducted by the AG's office revealed that some of the supplements were missing contents listed on their labels, while many also included undeclared allergens.

An 'Unbelievably Devastating' Revelation The testing found that Walgreens-brand ginseng pills actually contained only powdered garlic and rice, while Walmart's ginkgo biloba was determined to be primarily composed of powdered radish, houseplants and wheat. To add insult to injury, the label on the latter product claimed the pills were wheat- and gluten-free, effectively reassuring people allergic to wheat and gluten that they were safe to ingest.

Moreover, although Target's ginkgo biloba, valerian root and St. John's wort didn't contain the herbs on their labels, the testing revealed the presence of powdered legumes, a class of known allergens not included on the supplements' lists of ingredients. GNC's pills featured similar unlisted allergens.

"If this data is accurate, then it is an unbelievably devastating indictment of the [nutraceutical] industry," supplement safety expert Dr. Pieter Cohen, an assistant professor at Harvard Medical School, told the Times. "We're talking about products at mainstream retailers like Walmart and Walgreens that are expected to be the absolute highest quality."

Accuracy of Testing Comes Into Question as Retailers Respond As Cohen alluded, some parties have cast doubt on the validity of the results. The news source explained that the testing process involved a form of genetic fingerprinting called DNA bar coding, but it's possible the manufacturing process prevented some of the herbs' DNA from showing up. That being said, this doesn't explain the presence of allergens such as soybeans and peanuts in the products.

According to the Times, the four retailers responded to the findings in the following ways:

All companies that manufacture or sell nutraceuticals can learn from this situation, from the smallest business to the largest retailer. Including pertinent, accurate information on stickers and labels can prevent adverse health effects, legal action and damage to brand reputation.