This entry was posted on September 17, 2013 by Lightning Labels . 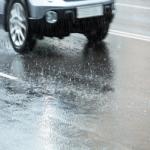 Last month, the Vermont Department of Motor Vehicles stated a batch of state-issued car window stickers that had been distributed to residents were created with faulty adhesive, according to WCAX.com, a local news provider. The announcement was made after the organization had received multiple complaints about the custom window stickers peeling off of windshields.

"Absolutely there's an adhesive problem," Robert Ide, DMV commissioner, told the source. "It's a manufacturer's problem and we've been notified of it, and working with the manufacturer we have some new sleeves coming that can go over the sticker to reattach them to windshields."

Loose inspection stickers aren't just a pain for car owners - they can also encourage thievery. According to the DMV, the stickers are highly valued on the black market, and once they're loose, they're easier to steal.

DMV Finds Solution to Peeling Adhesive Window Stickers After originally suggesting residents with peeling adhesive window stickers secure the corners with tape, the DMV recently came up with a new solution, according to WCAX.com.

The organization acquired adhesive squares that can be placed over stickers to minimize peeling. Ide told the news provider the DMV is instructing inspection stations to use the squares as they place new stickers on vehicles.