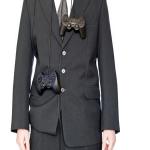 Warning labels are often affixed to products known to carry noteworthy heath implications. Alcohol and tobacco are most commonly subject to such labeling regulations, but newly proposed legislation would extend that requirement to include popular merchandise that may shock some.

In part a reaction to the recent frequency of tragic mass shootings in the country, a bill introduced in the U.S. House of Representatives would mandate video games display a warning label cautioning purchasers and parents to possible effects video games would have on users.

Labels Would Warn About 'Aggressive Behavior' H.R. 287 sponsored by Rep. Jim Matheson (D-Utah) would require video games to display labels that carry a text warning reading, "Exposure to violent video games has been linked to aggressive behavior." The label would be placed on the packaging as a supplemental warning to the ratings and labels already given to video games by the Entertainment Software Ratings Board.