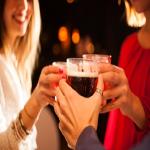 Beer bottle labels from numerous alcohol manufacturers have received a special treatment online - they've been animated. According to Gizmodo, a gadget review and news site, media editor Trevor Carmick has created a blog called "Beer Labels in Motion," where he takes existing labels and brings them to life online.

Orlando Weekly reported that the collection of animated images look real. Popular brewers like Dogfish Head, Miller Genuine Draft,  Yeti and Bitter American have received the treatment, and Carmick has promised more companies will have their beer labels become GIFs online. Dogfish's famous dogfish mascot swims around the bottle; the gargoyle on Stone's Ruination IPA has its wings move from side to side; and the monkey in space label for Bitter American looks like he's bouncing around in low gravity.

Online World Buzzes with Unique Beer Labels Gizmodo reported the blog featuring the unique beer labels is only getting started, and with the independent craft beer making industry coming into prominence across the country, less-known brewers may receive the animated label treatment later on.