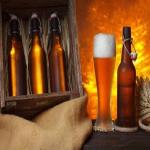 As of February, Anheuser-Busch's Bud Light is the first major beer brand to debut new, larger format beer nutrition labels. The Associated Press reported that the beer's calories and ingredients, as well as the amount of fat, carbohydrates and protein per serving, are now prominently stated. This was a voluntary move - the AP said it's not legally required - but it came in the wake of a 2016 agreement by major beer brands to disclose nutritional facts on their beer labels by 2020. Bud Light will very likely be the first of many beer makers to join the larger label movement. Some beers, like Corona Light, Guinness, Heineken and Coors Light, already show calories and other information on bottles or packaging, but usually only in fine print or hidden on the bottom of six packs, with ingredients typically not listed. The AP noted the similarity to the black-and-white nutrition labels required by the U.S. Food and Drug Administration on food packaging. "We want to be transparent and give people the thing they are used to seeing," said Andy Goeler, vice president of marketing for Bud Light. The Washington Post, however, reported that alcoholic beverage makers follow different rules. Historically they've not been required to disclose calorie counts because they are regulated by a different government agency, the Alcohol and Tobacco Tax and Trade Bureau.

Is your craft beer ready to introduce new nutrition labeling?

Goeler explained that Bud Light's research shows younger drinkers, in particular, want to know what's in their beer. "They have grown up really in tune to ingredients," he said. There is no word yet, however, on when other brands owned by Bud Light parent company Anheuser-Busch - including Michelob and Stella Artois - will follow with their own labeling changes.

Craft beer and ale brewers would be wise to follow this new trend in beer packaging. As they watch the major beer makers roll out improved labeling, they can take advantage of the marketing opportunities presented by this dramatic change in nutritional awareness by creating their own new craft beer labels.

Smaller brewers can even beat the larger companies to store shelves with the help of labeling specialists like Lightning Labels. Offering craft beer nutritional labels that can compete with the biggest brands, they provide craft beer makers with high quality digital printing, fast turnaround and flexible quantities from 50 to 15 million for a wide range of products, including beer bottles, beer cans, growler bottles and kegs, produced in a range of water-resistant printing finishes, both matte and glossy.