This entry was posted on February 19, 2013 by Lightning Labels . 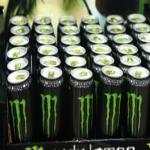 Recent investigations have led Monster to bring their beverage labels in compliance with U.S. guidelines, Bloomberg reported. Experts believe the change may be a result of a 2012 ordeal, which had U.S. regulators looking into five separate deaths that may have been associated with the energy drink products. Monster was also being sued by a family who lost a daughter that died while drinking two Monster drinks within a 24-hour period.

Because of the increased scrutiny, Monster will now include "nutrition facts" on labels instead of "supplement facts," Monster's CEO told Beverage Digest. The move will qualify Monster products as beverage items in the eyes of the U.S. Food and Drug Administration.

Inaccurate Caffeine Labels Linked to Health Risks The FDA has focused on energy drink labels compliance recently after a study showed several beverages were found to either not have caffeine labels or had ingredient levels well above their listed amount. A Consumer Reports study, conducted last October, found 11 of the 27 energy drinks tested do not report the amount of caffeine in their servings. Five of the 16 drinks that did list caffeine amounts on their labels reportedly had an average amount of caffeine 20 percent above the level listed on the label.