felənē® Vodka: What’s in a name? 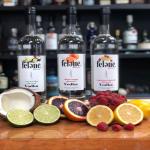 There are many reasons products have high name recall. In the case of Denver’s felənē® Vodka, it’s because most are curious about the name. Does it phonetically sync up to rhyme with “martini?” Nope. Is it a reference to felines, albeit spelled oddly? Nope. It’s actually the phonetic spelling of “felony.”

felənē® Vodka founder Tim Kelly distilled spirits as a hobby. He owned a reflex column still. “I didn’t like potatoes, corn or wheat. I came upon an idea of using organic sugar cane. I fermented and distilled it, but couldn’t sense the alcohol in the brew. So I took it to a chemistry lab at a local college, where it came back as 80 proof vodka,” Tim notes.

He adds, “My take on vodka had been that it was all punishment, no reward. As I started perfecting the product, I came to realize there was a science behind the smoothness. When it’s corn or the like, you have to add the enzyme amylase to convert starch to sugar. This creates acetal, esters, and a whole index of byproducts. When those get distilled out, what is left is harsh and bitter. As an olfactory experience, it’s like rubbing alcohol.”

In contrast, Tim says, fermenting with sugar cane makes a much cleaner alcohol. “The art of being a distiller is filtration, not distillation or fermentation. How you filter is a bit of an art. The science is in distillation and fermentation,” Tim emphasizes.

Okay, so how did the word “felony” get into the mix? Tim recalls, “So I have this product and I’m handing it out. A friend is an attorney. He says he loves vodka and that my vodka is a felony because ownership and possession of a still to rectify spirits is a felony. When I checked the phonetics of the name, it came up ‘felənē®.’ The name stuck.”

He adds, “Little did I know people would struggle with the pronunciation. The unintended consequence was that ‘improper recall’ was 100%, which helped sell the product in liquor stores. In 2018, we started looking at commercial production. We had established distribution in Buffalo, New York, with access to an educated workforce and being within 500 miles of most of the US population.”

Plans shifted, however, when in 2019 he decided to produce an organic product. “We looked at places where ‘organic,’ ‘sustainability’ and ‘non-GMO’ would resonate. That’s what led me to Denver.”

While the move was propitious for selling organic, gluten-free spirits, timing wasn’t. “We launched the product the week of the pandemic shutdown. Liquor stores were our saving grace, as we didn’t have bars or restaurants. It was the path forward. We circled the wagons and engaged liquor stores. We owe them a debt of gratitude, especially Bonnie Brae Liquor and Bruce Gallagher, our first client,” Tim notes.

What was lost during early pandemic has come back full force. Tim points out, “Last year, we expanded back into New York. This year, we opened California and Florida. At the Denver International Spirits competition in March, we launched felənē flavors. All took silver medals. We didn’t go down the path of watered-down, sugary products. We kept it organic, with no sugar even in the flavors, and all-natural extract. With help from our bottle vendors, we stocked up on glass a year ago. Past experience had told me that supply chain issues would disrupt supplies.”

Among those who’ve helped sustain felənē, Tim puts Lightning Labels and their bottle label printing services at the top of the list. “I can’t say enough about Lightning Labels. They’re amazing, so nimble, and so efficient. When customer service collapsed because of the pandemic, Lightning Labels didn’t. With John Ament, it’s like I had a whole staff. They are an integral part of our business. These guys are light years ahead of the competition.”