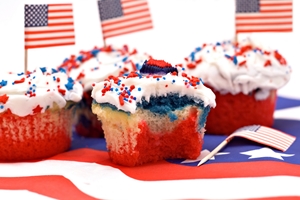 Add Uniqueness to a National Holiday with Fourth of July Labels

American adults spend an average of $68 on barbecue and picnic provisions for the July Fourth holiday, and people across the nation consume approximately 150 million hot dogs as part of the festivities, according to a USA Today infographic. Fourth of July labels are a creative and inexpensive way to make your family picnic or cookout stand out from the rest, both on Independence Day itself and in attendees' memories for months and years after.

In terms of design, custom labels and stickers for the Fourth of July can be as basic or complex as each family wants. If you're looking to keep it simple, the event name and date will suffice - for example, "Smith Family Independence Day BBQ 2015." Those interested in going a bit more in depth have a variety of approaches to choose from.

Why not use Fourth of July stickers to celebrate not only America, but American meat as well?

A practice known as country-of-origin labeling is currently mandated by the U.S. Department of Agriculture's Agricultural Marketing Service - although, as we noted in a recent article, the law's days may be numbered if the House of Representatives votes to repeal it in line with World Trade Organization regulations. For now, though, consumers can make informed decisions to purchase meat from domestic livestock for their Fourth of July barbecues.

According to The Washington Post, Iowa is home to nearly one-third of the nation's hogs and pigs, while North Carolina and Minnesota also have high porcine populations. That means there's a good chance the hot dogs and sausages you grill at your Independence Day cookout came from one of these three states - provided, of course, that you bought domestic. Share this patriotic and fun fact with your guests by printing it on custom stickers!

Labels: The Perfect Way to Add Pizzazz to Your Fourth of July Party Ideas

When it comes to celebrating July Fourth, most people default to hosting or attending a cookout, picnic or fireworks display. These Fourth of July party ideas may not be particularly original, but around Independence Day, tradition carries a lot of weight. That being said, there are still ways to spice up a run-of-the-mill celebration, which is where stickers and labels come in.