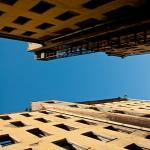 One group in California has created a local controversy after members of the organization placed eco-friendly custom stickers on derelict properties. According to The Sacramento Bee, WTF Sacramento decided to create a grass-roots campaign to urge city officials to clean up blighted buildings. However, after placing a few stickers with the group's logo on some properties, the newspaper reported city residents and officials have asked the organization not to move forward with their plans.

The movement began to get city hall's attention, according to local Fox-affiliate KTXL. The news source reported the group's members said they first research the building before placing a sticker.

Group Sparks Controversy After Distributing Custom Stickers The Sacramento Bee reported that the custom stickers have caused debate regarding whether it is a sensible way to get citizens involved in cleaning up the city.

Dion Dwyer, director of community services for the Downtown Sacramento Partnership, said that while the stickers are a good idea in theory, they are not an appropriate way to spark interest.

"Defacing someone else's property is not something we recommend," Dwyer said. "We love the idea of engagement, but this is not the right medium."