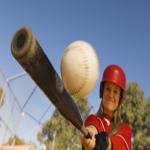 The stickers were created for the players to help victims of the recent tornados. McAlester News-Capital reports many of the teams donated their time or sent money to aid Oklahoma disaster victims. The Oklahoma Sooners were one of the teams that volunteered at local drop-off locations.

Stickers Customized to Aid Tornado Victims Worn During Tournament  The stickers customized for Oklahoma were used by Sooners to show state residents were sticking together after the recent disasters.

Patty Gasso, the coach of the Oklahoma Sooners, said it was important that the "Oklahoma Strong" stickers be part of the tournament.

"We were playing for more than ourselves," Gasso said. "There were a lot of people we wanted to give pride to and make happy."