This entry was posted on November 24, 2015 by Lightning Labels . 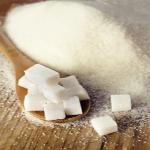 New Food Labels for Sugary Products Food labels may be facing new regulation by the United States Food and Drug Administration soon, according to Tech Times, as the FDA has announced plans to require labels for added or extra sugar on food products. The proposal is currently under review but was created in hopes of cutting sugar intake levels among consumers, explained the media outlet.

The proposal doesn't include a strict definition of what exactly constitutes an added sugar, but in the past, FDA guidelines have described it as "a sugar-containing ingredient that is added to the product during processing." As of now, food labels only include the total amount of sugar in the product, while the production process is left out of the calculation, noted the source.

Labels Fail to Reveal Hidden Sugar Sugar can exist in a lot of different food products. Ketchup is actually a large source of sugar intake for most consumers, as well as bread and pre-prepared soups, reported Tech Times. The new label proposal seeks to reveal sneaky sugar sources such as those.

Currently, the FDA recommends a daily sugar intake  equating to 10 percent of total daily calories, explained the source. For children 3 and above, this drops to 50 grams a day, the equivalent to the amount of sugar found in a can of Coke.

Mashable set out to illustrate what 50 grams of sugar a day really looks like. For example, a snack consisting of a peach Snapple, a mini wheel of Babybel cheese and a packet of Blue Diamond salted almonds would just about reach the daily limit, totaling 43 grams of sugar.

In addition to highlighting sugar additions, the FDA is proposing percentage of daily value as an added measure on labels, reported Mashable. The percentage will appear on the nutritional area of the labels to indicate how much of the daily sugar recommendation would be taken up by the product serving size.

Increased Consumer Knowledge Due to Proposed Labels The new proposal sheds light on an increasing problem in the average American's diet. Mashable noted a statistic from the U.S. Department of Agriculture that revealed added sugars are responsible for 16 percent of the total calories in an American's diet.

By informing consumers of these unknown additives, the proposal hopes to reduce caloric intake and improve American health. Whether consumers will take this new information to heart  remains to be seen, but the basis of increased consumer knowledge could appeal to shoppers.

"For example, a consumer who drinks a 20-ounce sugared beverage may be surprised to know it contains about 66 grams of added sugar, which would be listed on the label as 132 percent of the Daily Value," wrote Director of the FDA's Center for Food Safety and Applied Nutrition Susan Mayne, according to the source.

Labels Seek to Combat U.S. Health Risks High amounts of sugar in a diet have historically been linked to a laundry list of negative health effects, explained Mashable, from obesity to high blood pressure. To put it simply, too much sugar is no good for your health.

However, the new measures are not going through without some criticism. Tech Times reported that a study by The Journal of the Academy of Nutrition and Dietetics found that when additive sugars were listed, consumers overestimated the real amount of sugar in the food. This created an issue for food brands because consumers were overall less likely to buy the products.

The FDA proposal will no doubt draw criticism from food companies. Moreover, nutritionists are skeptical about the measure truly being able to curb obesity in the U.S., according to Tech Times.

"If you want to try and prevent obesity, or want to create policy that is going to help people, simply addressing the availability of junk foods and sodas isn't going to do it," argued David Just, a dietitian, as quoted in the Tech Times piece.

Whether these proposed new food labels will help in the fight against obesity or not, the added consumer knowledge may just be enough to push this proposal forward.