This entry was posted on September 26, 2013 by Lightning Labels . 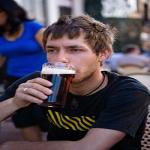 In a recent interview with The Rice Thresher, Rice University Police Department Chief Clement Rodriguez confirmed the institution will continue requiring students 21 and older with out-of-state identification cards to acquire and place a small custom sticker on their IDs if they wish to consume alcohol at campus events. The customized stickers are blue and in the shape of an owl's head.

Rodriguez stated the adhesive requirement is aimed at curbing the use of false IDs, which are often created for states other than Texas. Police and other ID-checkers often aren't familiar with out-of-state licenses, making them easier to be accepted as legitimate ones.

Owl Stickers Must Be Used by all Non-Texas Residents In addition to requiring out-of-state license holders ages 21 and older to place owl stickers on their IDs, the university police is mandating international students put the adhesives on their passports or other government issued identification.

While some students see the requirement as reasonable, others believe it doesn't completely resolve the issue of underage drinking. College student Katie Specht told The Rice Thresher some Texas residents who are underage may use their older siblings' IDs.

"I don't think it's fair to say that just because an ID is from Texas [means] it's not fake," Specht said.