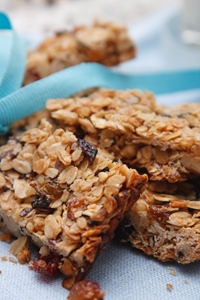 CEO Lubetzky Argues Label Regulations Are Outdated and Counterintuitive Just because a food product isn't labeled as healthy, doesn't mean it isn't good for you. At least that is what snack-bar company KIND, with help of nutrition and health experts, is arguing.

In December 2015, KIND announced a citizen petition requesting the United States Food and Drug Administration amend labeling laws regarding its definition of "healthy."

The company insists that the FDA's current guidelines, which were initially developed over 20 years ago, are outdated and fail to coincide with modern scientific findings.

"Our goal is to highlight the importance of following a healthy diet that includes foods made with wholesome and nutrient-dense ingredients," KIND Founder and CEO Daniel Lubetzky said in the statement. "The current regulations were created with the best intentions when the available science supported dietary recommendations limiting total fat intake. However, current science tells us that the unsaturated fats in nutrient-dense foods like nuts, seeds and certain fish are beneficial to overall health."

Regulations Unfair in Fat Content Requirements The idea that the FDA's guidelines are counterintuitive isn't too farfetched, especially considering recent reports have revealed a number of cases where labeling practices are having adverse affects rather than achieving what they're intended for, such as the study that found that the smaller a serving size is, the more of the food a person will eat.

According to current FDA regulations, to be considered, and therefore labeled as, healthy, all food products, aside from meat and fish, must contain no more than 3 grams of total fat and no more than 1 gram of saturated fat per serving.

In a recent interview conducted by Marc Gunther of The Guardian, Lubetzky argued that the existing regulations don't make any sense because consumers already know "that all fats are not created equal."

Lubetzky told the Gunther that he was bothered by previous media headlines indicating he was starting a fight with the FDA. After the warning, KIND complied and made the necessary changes, but Lubetzky now thinks the FDA needs to make some changes of its own, which is why he "respectfully" asked the organization to amend its labeling laws.

Argument Against FDA Labeling Violations How effective the company will be in its efforts is hard to predict.

Food policy expert and lawyer, Michele Simon, told Gunther that she agrees with the stance KIND is taking but thinks it would be more effective if it was a unified effort with more businesses across different industries.

"FDA is unlikely to take action based on one company's request," she explained. "If they had teamed up with the rest of the nut industry, or the olive oil or avocado industry, they'd have had a better chance."

In his article, Gunther also noted that Scott + Scott is representing two clients who have filed a law suit with the federal court claiming they purchased KIND bars "under the mistaken belief that these products were healthier" than other options. The plaintiffs are requesting a minimum of $5 million in damages due to "deceptive labeling, packaging and marketing."

The company stands behinds its position of offering essential nutrients through ingredients such as nuts, whole grains and fruit. Its petition is currently being reviewed by the FDA.