This entry was posted on August 19, 2013 by Lightning Labels. 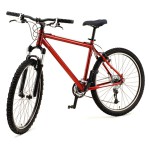 In the month following the death of Kelly Boyce Hulbert, a 29-year-old who was killed in a hit-and-run accident while biking, friends and family in Traverse City, Mich., have sold more than 1,000 stickers and wristbands to honor her memory, according to Up North Live, the local NBC affiliate.

The initiative is aimed at raising awareness about the tragedy and keeping the accident at the top of residents' minds, as police investigations have not yet determined who was driving the vehicle that struck Boyce Hulbert. Shortly after her death, friends and family began selling wristbands, which sold out. In addition to creating more wristbands, those close to Boyce Hulbert began selling stickers as well.

Custom Sticker Proceeds Will Go Toward Community
Mike Moran, a friend of Boyce Hulbert's family, told Up North Live the proceeds of the custom sticker and wristband sales will go toward community initiatives, including children's programs and a local recreation and alternative transportation nonprofit called TART Trails.

"Everybody likes the stickers," said Joe Lorenz, a personal training manager at a local gym selling the stickers. "They're a good design, so that helps. You can slap them all over the place, so that's nice. A lot of people have been putting them on bikes, cars, everything."